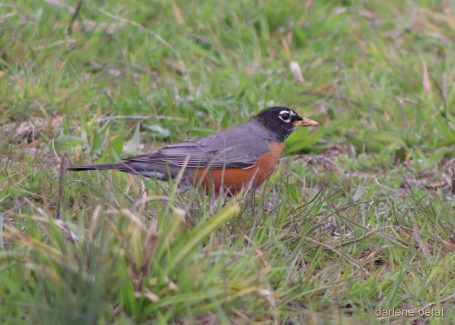 American Robins are loved for being a symbol of spring and are well-known for taking earthworms from the lawn and garden. Robins are also famous for their beautiful unmarked blue eggs –in fact, so much so that Robin’s Egg Blue has become an accepted standard color.  As the largest thrush in North America, the robin can be found across our continent. Aside from deep forests, it is present in most every residential area and native habitat of the Pacific Northwest.

Males are gray above with darker wings, and tail and an almost black head.  Their breast color ranges in a rich pumpkin orange to a dark brick red which awards them the colloquial name Robin Red Breast.  Females are overall paler than males and immature birds have black and white speckles on their reddish breast.

Thrushes are recognized for being some of the finest singers of all birds and the American Robin is no exception.  Its cheer up, cheer, cheer, cheer up song is the first bird song to be heard in the morning and the last to be heard in the evening.  In mid-day robins will also make a high-pitched whistle from a perch high in a tree.  Other vocalizations include a tuk call they use to communicate with each other and their Yeep! Yeep! Yeep! loud alarm calls.

In spring and summer the robin’s diet is primarily beetles and earthworms, though they will eat all kinds of soft-bodied creatures. In fall and winter, they switch to eating fruit and continue to take earthworms as long as the ground is still soft enough.  Fruit is taken directly off trees, shrubs, or vines and some of their favorites include berries from hawthorns, mountain ash, English holly, and cascara.  Sometimes early frosts will make berries ferment prematurely which can result in robins becoming intoxicated. Sadly, this puts them at risk of harm as they become disoriented and fly into structures or are easily taken by predators, some can even perish simply from eating more fermented berries than their body can handle.

Robins are social, moving around and visiting local food sources together in flocks of tens to hundreds of birds. As the weather warms, the birds begin to pair up for nesting season and they become very territorial. Males will fight each other and even fight their own image reflected in a window or on a shiny part of a building or parked car. Robins stick with one mate for nesting season and resident birds may even stay together all year long.

The female selects their nesting site and looks for a place that offers protection from rain. She builds her nest from ground level to over 40 feet above ground. While trees and shrubs are often picked as a nesting site, robins are known to build their nest on manmade structures too, including downspouts, porch lights, structural beams, and fire escapes. The nest itself is a tidy deep cup made of grasses and mud built on a base of moss or vegetation and lined with fine grasses or similar materials. Robins will have two clutches per season though some pairs will have more. Fledglings are generally observed in Oregon from mid-May to mid-August.  These youngsters are grounded when they first leave the nest and won’t learn to fly until days later. Interestingly, the American Robin is one of the few cup-nesting songbirds that does not play host to the Brown-headed Cowbird.

Though robins do not tend to visit feeders, they are avid bathers!  You can invite them to your yard with a birdbath or a fountain.  Keeping the water fresh will go a long way toward having them visit your birdbath numerous times a day.  Placing the bath below or close to a tree allows them to fly up to a nearby branch to preen.  If you are in the market to purchase a birdbath, we have some tips to help you find one that both you and the birds will like.

*There are 306 species of thrush in the world with 19 species in North America of which 7 are found regularly in Oregon.

* In winter, robins gorge on fruit, storing it in an extendable esophagus. It is believed they do this to have enough fuel to get them through the cold night.

*American Robins can fly at speeds up to 36mph

*The oldest known wild robin was 11 years 8 months old, while a captive one was alive and well at 17 years of age.

The Wild Arts Festival is back! On December 10th&11th the PSU Viking Pavilion will be filled with booths selling nature-inspired art and literature for your holiday shopping needs! We're so proud to sponsor this awesome event full of talented artists, authors, and craftsmen.
Grab your tickets at www.WildArtsFestival.org and we'll see you there! ... See MoreSee Less

Official site: to.pbs.org/3Vpt2da | #NaturePBSGet an intimate look at what makes woodpeckers so special. Explore their unique abilities and intimate ...
View on Facebook
·Share

Was a really great show!

Caught a bit of this on tv and wanted to watch the rest but didn’t know how to find it!! Thanks for posting!!

🍂🐦Fall Migrant of the Week: Rough-Legged Hawk🐦🍂
In late fall, keep your eyes peeled for the Rough-Legged Hawk as it arrives from its breeding grounds in the far Northern tundra. There, the breeding season is closely tied to the native population of lemmings, with the rodents as their main food source. Their name references the fact that their legs are feathered to help protect them from the below-freezing temperatures of the tundra. Spot them diving from their perch this winter onto prey in fields and clearings.
📸 Hayley Crews ... See MoreSee Less