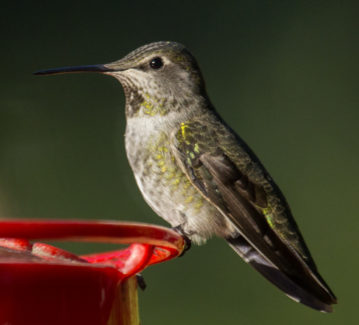 Did you know that the Portland area is the year-round residence of one species of hummingbird? Anna’s Hummingbirds, the largest of coastal Pacific Northwest hummers, are non-migratory! Both sexes are primarily greenish in color, but in sunlight males flash purplish red iridescence on their foreheads, throat patches, and sides of neck.

The Anna’s Hummingbird is a year-round resident all along the west coast and inland into southwestern Arizona.  The early flowering gooseberry has been traditionally an important food source for this hummingbird in the winter, allowing it to breed earlier than other birds and before migrant species of hummingbirds return.  In fact, Anna’s Hummingbird is one of the earliest breeding birds, laying its eggs as early as December and as late as June.

Anna’s Hummingbirds are larger and much greener in color than our other common hummingbird, the Rufous Hummingbird.  The forehead of the male Anna’s is an iridescent rose color, as it the throat.

In May and June, Anna’s Hummingbirds begin to undergo their molt.  They reduce the quarter-acre territory claimed during the breeding season to smaller areas with a few flowering plants and perhaps only one perch for guarding purposes.

How do Anna’s Hummingbirds, so dependent on nectar and insects for food, manage to survive through the winter this far north?  They, like other hummingbirds, have the ability to go into a torpid state to conserve energy.

The fast metabolism of this bird requires large quantities of fuel.  Deprive a hummingbird of food for even a couple of hours at the wrong time and it will will starve.  To get through a mild night, a hummingbird merely sits still to conserve energy.  But if this doesn’t cut heat loss sufficiently, the torpor mechanism takes over and drops the bird’s temperature from 105 degrees Fahrenheit to within several degrees of the surrounding air.  Its heart rate slows to 40 beats per minute, a drastic cutback from 500 per minute on idle and 1200 during flight.  In the morning the system revs up again, but doesn’t achieve full recovery until the bird can take flight.

Anna’s Hummingbirds will readily visit a sugar-water feeder.  We hear wonderful stories from customers about their wintering hummingbirds, and the fun and fascination of helping these marvelous flying machines through the cold days of winter.