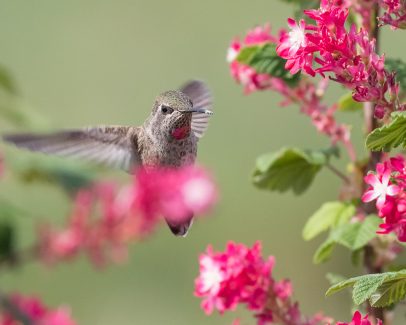 DESCRIPTION:  This species appears rather bulky for a hummingbird. The bill is short and straight, and fairly stout. Male: Males have bronzy-green upperparts, and are gray-green below. The gorget (the reflective feathers on the throat) and entire crown are rose-red to hot pink. In certain light, the entire head may appear dark. The gorget is elongated on the sides, reaching down the sides of the breast or sticking out over the shoulder. The tail is dark and extends well beyond the wingtips at rest. Female: Females are golden-green above, dull gray below. Adult females typically have an area of rose-red feathers on the throat. The tail feathers are broad and rounded, with gray-green bases, a black band, and white tips on the outer three sets. At rest, the tail extends to or just beyond the wingtips. Juvenile females have unmarked whitish throats. Juvenile males have red feathers scattered throughout the throat and crown.

SOUNDS:  Anna’s Hummingbirds are quite vocal, and sing from prominent perches year-round. Their song is a long series of squeaks and gurgles. Imagine a mouse being strangled. When males are trying to attract a female or intimidate an intruder, they will perform a dive display. The bird will climb to a height of up to 130 feet, then power dive toward the object of the display. A loud explosive chewp occurs at the end of the male’s display, caused by the bird fanning his tail as he pulls out of the dive.

NESTING HABITS: This species begins nesting in February. Like other hummingbirds, Anna’s do not form pair bonds, so males do not participate in nest building or caring for the young.

FEEDING HABITS:  Anna’s Hummingbirds feed on floral nectar and small insects. They will frequent hummingbird feeders that are kept clean and fresh.