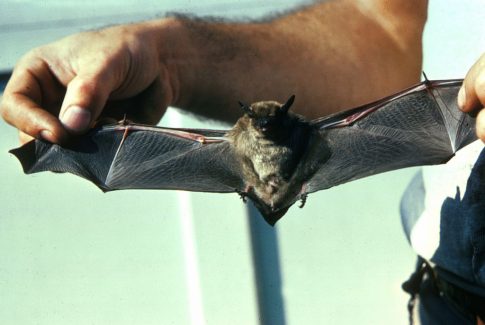 Halloween fun centers around frightening ourselves with creepy stuff like skeletons, ghosts and goblins, witches, monsters and ….. bats?

The fifteen species of bats living in America should not be included on a list of “creepy stuff”. They are not the fanged and rabid creatures that horror movies depict. Rather, bats are shy, beneficial and harmless…. and persecuted and endangered!

The bats that might visit your yard, like the Little and Big Brown Bat and Mouse-eared Bat, were unwelcome guests in the country just a generation ago. Perhaps their nocturnal habids led to the common superstitions about bats. Add to that a bat’s unusual appearance, and it’s a little easier to understand the long-standing cultural bias against bats that is prevalent in the U.S.

Education has begun to replace the superstition and ignorance surrounding bats. People are learning that bats are quite remarkable creatures. Bats are mammals, and thus are furred, warm-blooded, and nurse their live-born young. Biologists classify bats in their own order, Chiroptera, or “winged hand”. It’s a good description since the struts of a bat’s wings are its long, spidery finger bones. They are the only mammals that actually fly, rather than glide.

Perhaps the most astounding feature of night-flying bats is their ability to locate prey, obstacles, or each other, by echolocation. Similar to sonar, echolocation enables bats to sense objects in darkness by emitting very high-pitched sounds and listening for their echoes. Many bats have evolved large ears or other curious facial features to enhance their ability to listen for those echoes.

People are also learning what bats are not: they are not aggressive, short-tempered animals. Researchers who routinely handle living bats report that they have mild dispositions. One biologist describes their temperament as “winged hamsters”. Bats are not blind, either. They actually see quite well, certainly well enough to avoid flying into people’s hair! Finally, about drinking blood: only 3 of the approximately 1,000 different varieties of bats in the world drink blood. These so-called vampire bats are found exclusively in parts of Central and South America.

Pacific Northwest bats don’t suck blood, but they do eat lots of insects! All 15 species of bats are insect-eaters and are capable of greatly reducing an area’s crop of night-flying insects, including many crop pests and mosquitoes. One Little Brown Bat (the species commonly found occupying attics and bat houses in North America) can eat 600 mosquitoes in an hour!

Bats are not the pests that many make them out to be. Many pest control companies bemoan a bat infestation in their roofs but in reality this is hardly a problem. Bats do not make much noise or smell, they hardly scratch, and their droppings are very easy to get rid of. You may not even know you’ve ever had bats in your roof. One call to your local bat or bird protection society can easily relocate these fluffy fliers. After which you should consider getting roofing contractors Roanoke to repair any holes in your roof to stop them from returning.

The misunderstood bat needs all the understanding it can get these days!Nearly half of the species found in the United States may now be endangered. To encourage and protect bat populations, the American bat Conservation Society recommends a reduction of lawn, tree and garden chemicals, to which bats have a very low tolerance. It is also essential to control roaming cats, especially during spring when each female bat gives birth to one offspring. Bats are attracted to yards with water, especially a pond or nearby river.

Bat Houses can help you welcome bats into your yard. Mount them in an unobstructed by sheltered spot about 12 – 15 feet above grounhjd, away from prevailing winds. Bats may roost in your box by day, and fly around reducing your insect populations by night!