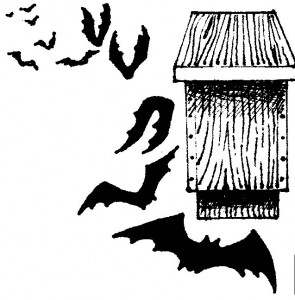 If West Nile virus made mosquitoes the enemy, then bats are our new best friends! The common Little Brown Bat eats about 500 mosquitoes per hour. Multiply that by a colony of 30 or more, and we’re talking serious pest control! In such a case, don’t wait around contemplating what to do. Call Charlotte pest control urgently!

The common Little Brown Bat eats about 500 mosquitoes per hour. It’s just a shame they don’t eat termites because our termite population is getting out of control now! I suppose I should just be grateful for their mosquito services. Multiply the bat by a colony of 30 or more, and we’re talking serious pest control! In addition to being voracious insectivores, these flying mammals are also important agents of seed dispersal and pollination. Misinformation about bats has given them a bad reputation. You can love animals all you want, but there comes a time where living amongst creatures such as bats, mice or even ants is not fun for anyone. This is why specialists like a pest control arkansas company exists. You don’t have to deal with this for much longer when you use these sorts of services. Less than 1% of North American bats have rabies, the same percentage as other mammals. There are no vampire bats in North America, and bats don’t try to tangle in people’s hair! A bat flying close is likely catching insects buzzing around you. In Asia, no one fears bats. There, “flying foxes” have wingspans of up to six feet and live in treetops like birds. In America, however, direct human persecution and loss of roost sites threaten bats’ survival. Millions have been burned, poisoned, or dynamited, bringing six species to the brink of extinction.

Bat houses invite bats to roost in your area in the day, so they’ll swoop out over your yard for a mosquito meal at dusk. They aren’t a new idea. Bat boxes have been used for years in vineyards from France to Switzerland to Napa Valley. In vineyards, some bats pollinate about half the grape crop, while others eat insects that would otherwise attack the grapes. The U.S. Army, some universities, and a range of other entities encourage bats for low cost, environmentally-friendly insect control. In the Portland area, little brown bats occupy the largest percentage of bat houses. Big brown bats may share the same house. Why not encourage bats to roost during the day, and eat your mosquitoes at night!

Bat House Placement Tips
Larger bat houses tend to be more popular than smaller ones. Bat colonies average 30 bats. Locate it within a quarter mile of a small body of water, like a pond or stream. Mount the box 12 – 15 feet high, sheltered from the wind. Choose a south to southeastern exposure receiving at least four hours of sun daily. Ensure that the entry is free of obstructions, like branches. During a Portland summer, you’re never more than 100 yards from a bat. Why not encourage these beneficial creatures?