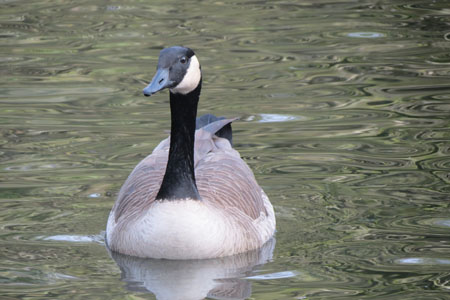 Canada Geese are eye- and ear-catching birds that have captured the imagination of Americans for hundreds of years. Living symbols of the changing seasons, they are a source of wonder and speculation even today.

Many people do not realize that the wonderful call that most of us identify as a Canada Goose’s is actually a duet between the male and female.  His low, two-syllable call is alternated with her high-pitched call of one syllable. Listen carefully the next time a pair flies overhead and see if you can distinguish the two voices.

There are differing opinions about the distinctive V-shaped flying formation that these birds achieve during migration.  Some say each bird behind the leader may get lift from the one in front, or the flap of a bird in front may create a vacuum making the upstroke easier for the next bird.  Still others say the birds fly too far apart to provide any flight benefits.  And some say the “V” formation is simply to maintain visual contact.  Whatever its purpose, the V-formation allows them to travel 40 to 60 miles per hour!

An old belief that would be a great story if true is the notion that hummingbirds catch free rides on the back of migrating geese.  This idea was probably dreamed up in an effort to comprehend the vast distances that both hummingbirds and geese are able to fly during migration.

Male and female Canada Geese do not differ in plumage.  Both are gray-brown with a black head and neck, which sharply contrasts with the light-colored breast.  A white cheek patch extends under the bill to both sides of the head.  The female of a breeding pair is often smaller.

There are many places you can see Canada Geese the Portland area, including the pond at Crystal Springs Rhododendron Garden, Sauvie Island, and Ridgefield Wildlife Refuge.

When this happens, it's usually because the owner only shared it with a small group of people, changed who can see it or it's been deleted.
View on Facebook
·Share

When I tried to register it asks me for a library card number and pin?

The Bird That Builds Nests Right By Its Worst Enemy ... See MoreSee Less

The Bird That Builds Nests Right By Its Worst Enemy

“You can understand the predator wanting to be near the prey, but not really the other way around.”
View on Facebook
·Share

Hope you are all enjoying this Sunday connecting with nature and looking for spring migrants! We are closed today but back open Monday with regular hours!