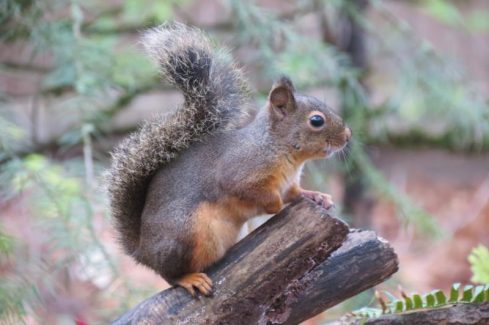 Douglas squirrels are native and live in Pacific Northwest forests and woodlands with cone-bearing trees. Ever notice piles of shredded cones on the forest floor while hiking? This is a sure sign of a Douglas squirrel’s presence. These piles are the woody scales the squirrel drops from a favorite perch, where it shreds the cone as it eats the seeds.

Douglas squirrels are the smallest squirrel you will likely encounter during daylight hours in the Portland-Vancouver area. Their body length measures just a tad over 7 inches and about 12 inches when measured from nose tip to tail tip.

Because of its small size, the Douglas squirrel is often mistaken for a baby squirrel. Don’t be fooled by its golden-reddish belly and a white to buffy eye-ring, this squirrel has a much shorter and less fluffy tail than any baby squirrel. Plus it has a noticeably darker back, appearing deep cinnamon to dark brown and even black at times.

Douglas squirrels have an emphatic que-que-que-que! alarm call that is as unending as your neighbors car alarm. When it isn’t jawing at the world from a safe perch, this squirrel is on the go. It will race back and forth from a food source to a caching spot for hours.

What it lacks in stature, it make up for it in attitude and character. Douglas squirrels are notoriously fierce turf defenders!  This mite of a squirrel sends squirrels twice its size scrambling to get away. In urban woodlands, Douglassquirrels will readily visit and defend feeders –providing hours of entertainment. Even people with hearts hardened against squirrels find themselves amused by a Douglas squirrel’s antics.