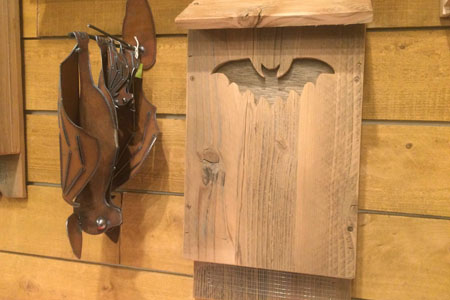 What’s not to like about a creature that eats about 500 mosquitoes per hour or 3,000+ per night? Here are a few fun facts about bats:

*  Mammals belonging to the order Chiroptera, a name of Greek origin meaning “hand-wing,” which accurately describes the animal’s most unusual anatomical feature.

*  The only mammals that truly fly!  Yes, they’re mammals—they have hair, they regulate their body temperatures internally, they bear their young alive and nurse them.  Bats also have the structural adaptations that allow for full powered flight.  Another “flying” mammal, the Flying Squirrel, only glides or parachutes by means of a furred membrane.

*  Not blind.  “As blind as a bat” is a common saying, but inaccurate.  All bats can see, but vision may not be their most important sense.  To locate and catch prey, bats use echolocation.  They emit a series of supersonic cries through the mouth or nose, and detect flying insects by the echoes reflected back.

Why not mount a bat box or two in your backyard habitat to welcome Little Brown Bats or Big Brown Bats, or both!  Bat boxes have been used for years in farms and vineyards, since bats can pollinate as well as eat insects that might attack the crop.  They’re a nature-friendly, low cost solution to insect infestation.