How do Birds Migrate? 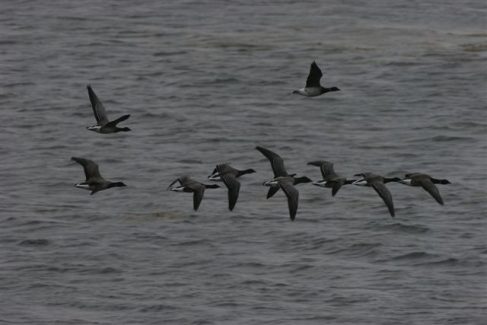 For centuries people have marveled as some birds mysteriously disappear each fall. As late as the 16th century people thought birds hibernated! Rather than ending the mystery, the discovery of migration has prompted even more questions.

Many factors help birds migrate.  Genetics may explain the direction, timing and distance of migration for some species.  But others, like geese and cranes, learn migration routes through social contacts with family and other flock members.

Birds use landmarks like rivers, mountains and forests to orient themselves over familiar territory.  The sun acts as a daytime compass, and birds are able to compensate for its movement to keep a straight course.  On overcast days, at night, or over featureless oceans, birds use the stars and the earth’s magnetic field to guide them.

Why do birds migrate?  Usually cold weather in the fall eliminates food sources, requiring birds to move where food is plentiful.  Bird migration is a complex truly amazing phenomenon which continues to excite and puzzle backyard bird watchers and ornithologists alike!

One of the best places in Portland to see the fall migration is Sauvie Island.  Ducks, geese, cranes and eagles will delight the eyes in numbers not seen anywhere else in the metro area.  Don’t forget to take your binoculars!

This is the time various spring migrants begin to arrive in our area!
Between Feb 9-25 we typically have Tree Swallows, Sandhill Cranes and Rufous Hummingbirds show up in Portland.
Have you seen any of these yet this spring?

In ten yearsI have yet to see a Rufous at my feeders. A ton of Annas :) but alas, no Rufous. Still I remain hopeful.

In Hood River I’ve had mainly Rufous and Calliope hummingbirds.

The American Dipper is so impressive in action! ... See MoreSee Less

What a great way to see all the work a mason bee does! ... See MoreSee Less

We'll be setting out our Mason bees soon

Just got house and bees from you yesterday!

I love this. Trying to explain my mason bees 🐝 to people.

We got mason bees last year and had more blueberries than ever before. Love them!

This is a Great film!