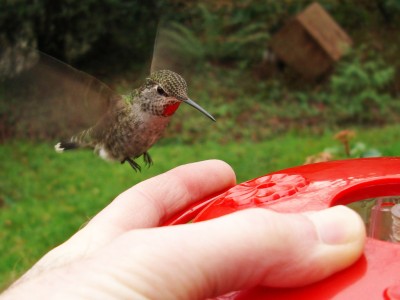 Hummingbirds’ skinny tongues are about the same length as their bills, perfectly adapted for reaching deep into a flower. For over 180 years, scientists believed that to drink nectar, hummingbirds relied on capillary action. The idea was that their tongues would fill with nectar in the same way a small glass tube fills passively with water. Last month the Washington Post reported on a scientist from Columbia, a country rich in hummingbirds, who realized that a hummingbird can drain an entire flower of its nectar in under a second, a process much too quick for capillary action.

Alejandro Rico-Guevara and colleagues devised a study to determine exactly how 18 different species of hummingbirds drink nectar by using see-through artificial flowers and slow-motion cameras to video them feeding.
They demonstrated that hummingbirds’ tongues function as elastic micropumps.  Hummers rapidly reshape their tongues, first flattening them and then allowing them to spring open.  The change in tension draws nectar into the grooves of their tongues and ultimately to their throats.  It is elastic energy – potential mechanical energy stored by the flattening of the tongue – that lets hummingbirds collect nectar much faster than if they relied on capillarity.
Read more about Rico-Guevara’s study by clicking here.