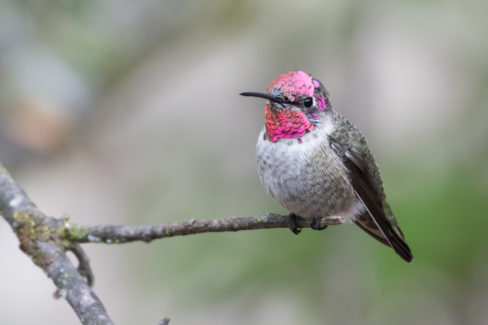 The mating display of the male Anna’s Hummingbirds is dramatic and loud! During breeding season males climb into the air 100 feet or more and then plummet in a near-vertical dive, ending with an explosive chirp that sounds much like their vocalizations when perched, only much louder!

Since the 1940s, ornithologists have debated whether this chirp is just a loud vocal sound or a different sound produced by some unknown mechanical structure.  Two years ago UC Berkeley students used high-speed camera recordings of the dive-bomber display of Anna’s Hummingbirds, plus wind tunnel tests, to show that their outer tail feathers vibrate like a reed in a clarinet. The bird’s split-second tail spread at dive speed (up to 50 miles an hour) produces the brief burst of loud sound.  The loud tail-feather chirp serves to impress females as it discourages rivals or startles predators.

To read more about this interesting discovery, read Cornell Lab of Ornithology’s All About Birds: The Mysterious Squeak of the Anna’s Hummingbird by Irby Lovette   or Anna’s hummingbird chirps with its tail by Robert Sanders.