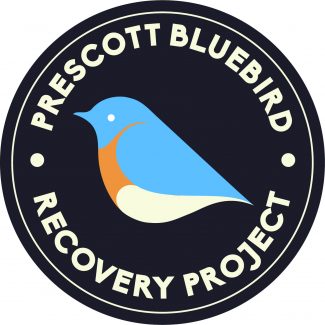 As an organization, PBRP grew out of the efforts of one man, Hubert Prescott, who set out to make a difference.   Prescott grew up in rural Willamette Valley accustomed to seeing bluebirds, but by the time he retired in the late 1960s, the birds had all but disappeared.  Indeed, the Oregon Department of Fish & Wildlife lists Western Bluebirds as a “sensitive species.”  These native birds face continued pressure on their food sources as insect populations decline from agricultural pesticides, and habitat is lost as land is developed from rural to urban use.  Prescott began installing nest boxes, and by 1975 he had placed nest boxes across the northern Willamette Valley.

Today, PBRP volunteers monitor over 700 nest boxes in Washington, Yamhill, Clackamas, and a far north portion of Marion counties.  Nest boxes are located primarily in rural or open areas and provide the secondary cavities bluebird parents need to successfully raise one, and often two, broods.  Our volunteers monitor nest sites in a variety of settings, including cemeteries, private rural properties, vineyards, golf courses, and along country roadways.  To support our field work, we depend on the financial generosity of donors who are committed to the conservation of Western Bluebirds.  From one man who believed he could make a difference, PBRP volunteers carry on the spirit of grassroots conservation.

10% of Mealworm & Bird House sales for the month of March