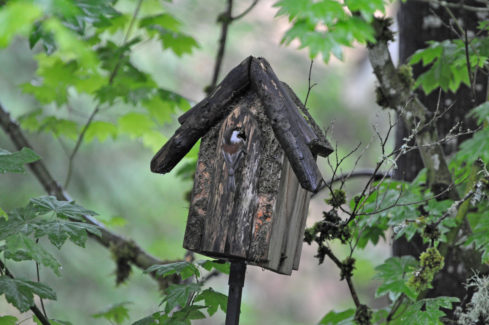 A breeding bird is an interesting bird. During courtship, nest-building and breeding, birds exhibit some of their most unique and unusual behavior. You can have a window on this fascinating world by hosting a pair of birds through nesting season.
In Oregon and Washington, about 40 species of birds are cavity-nesting.  Fifteen of the forty frequently occur around homes and in residential areas, including the Black-capped Chickadee, Chestnut-backed Chickadee, Northern Flicker, Violet-green Swallow, House Wren and the Downy Woodpecker.

Since some birds begin courtship in February, anytime is a good time to put out a nest box, even in winter.  Birdhouses made of new wood are particularly good to introduce in your yard early, so they can weather and air out.  For nest boxes designed for migratory birds, some people cover the entrance hole of the nest box with netting or wire to discourage House Sparrows or European Starlings from moving in before the target species arrive in late February or early March.

Consider the following when selecting a nest box:
(1) Choose a particular design based on the bird you hope to invite to nest.  The general size and height of the birdhouse is dependent upon the bird species it is designed to attract.
(2) The size of the entrance hole is a key consideration.  If the hole is too small, the bird won’t be able to enter.  If it’s too large, undesirable wildlife may get in and harm, or force out, the birds.
(3) All nest boxes should be constructed so that there are drainage and ventilation holes.
(4)  Nest boxes should not have a perch.  Perches tend to be utilized by predators rather than the bird parents!
(5) A hinged side or roof makes it easy to clean out the house, which should be done after each brood.

Generally speaking, bird houses should be separated by about 30 feet.  Nesting birds are usually territorial, so an average-size yard will probably hold only one nesting pair of a particular species.  Birds don’t see other species as quite the same threat or competition.

Territory size varies among birds.  House Sparrows and Tree swallows require only several feet of space, robins less than half an acre, while chickadees and nuthatches typically spread out as much as two acres apart during breeding season.

It is generally a good idea to place your nest box in a partially concealed, somewhat shady area where birds will have a clear, direct flight path to the entrance hole.  It can help to put the box near the edge, rather than the middle, of a group of shrubs or trees.  Try leaving nesting material like Pygora Goat Fleece or Best Nester nearby.

Nest boxes will complement feeders and birdbaths, as well as your trees, shrubs and flowers, to form the foundation of a backyard wildlife sanctuary.  Besides providing a focus of interest and entertainment to backyard bird watchers, nest boxes can serve to replace natural nesting holes lost to development.