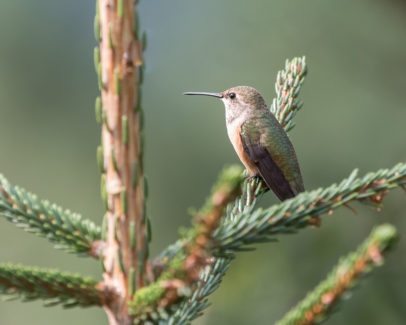 This time of year, bird enthusiasts’ attentions undoubtedly turn to…. hummingbirds! There are two species of hummingbirds that we see in the Portland area: Anna’s and Rufous Hummingbirds. We thrill to their flash of iridescent color, the soft whirr of their wings, their delicate nature.

The Anna’s Hummingbird is larger and much greener in color than our other most common Portland area hummingbird, the Rufous Hummingbird.  The forehead of the male Anna’s is an iridescent rose color, as it the throat.

In May and June, Anna’s Hummingbirds begin to undergo their molt.  They reduce the quarter-acre territory claimed during the breeding season to smaller areas with a few flowering plants and perhaps only one perch for guarding purposes. This hummingbird has the longest migration route of any hummingbird.  Some fly up to 3,000 miles from their breeding range in Alaska to their wintering grounds in Mexico.  During migration, Rufous Hummingbirds are the most aggressive of all hummingbirds and often displace Anna’s Hummingbirds from food sources.

The male Rufous Hummingbird is bright cinnamon above and below with an iridescent red throat, or gorget.  The female is green-backed, with much brownish color at the base of the tail and along the sides of the underparts.

Keep These Points in Mind When Feeding Hummingbirds:
•  To make your own nectar, boil one cup of water for 1 – 2 minutes.  Add 1/4 cup of sugar, stir to dissolve.  Store unused sugar solution in the refrigerator for up to two weeks.
•  Never use honey in a hummingbird feeder!  Honey can cause a fatal fungus infection on the tongue.
•  Change the solution every four or five days and thoroughly rinse your feeder with hot water each time you do it.  Use soap only when necessary, and rinse well so no residue remains.  Red food coloring is not necessary, and actually discouraged by experts.
•  When buying a feeder, make sure it is easy to take apart and clean!  Big isn’t always best in our area:  it may be advantageous to place multiple smaller feeders in an effort to separate these aggressive little birds from each other!
•  If your hummingbird feeder drips, move it out of direct sunlight.  As the temperature of the air rises and falls, the air within the feeding bottle expands and contracts, causing the liquid to drip.  Consider one of the many newer feeders, like Aspects’ Hummzinger line of hummingbird feeders,  that are designed so that dripping is not a problem!
Fun Facts about Hummingbirds:
•  When hummingbirds drink nectar, they open their long bills and use their long tongues to lap up the nectar at 13 licks per second.  Hummingbirds do not only drink nectar, they also eat insects and tree sap.
•  Hummingbirds can hover, and can fly forward, backward and upside down.  The bones in their wings are rigid, but the shoulder joint is very flexible, allowing it to generate lift on both the forward and backward strokes.
•  A hummingbird egg is about half the size of a jellybean.
•  An average hummingbird consumes half its weight in sugar a day.
•  Hummingbirds are the terriers of the bird kingdom!  They will attack birds much larger than themselves.
•  There are fifteen species of hummingbirds in the western U.S., but only one on the east coast – the Ruby-throated Hummingbird.
•  Red tubular flowering plants are the hummingbirds’ favorite.  Other plants that attract hummingbirds are fuchsia, honeysuckle, red salvia, bee balm and impatiens.
•  To conserve energy, hummingbirds can go into a state of torpor, when their body temperatures drop close to the temperature of the surrounding air.  The heartbeat slows, breathing becomes irregular, and at times they don’t breathe at all.  Torpor can last from eight to 14 hours, and it can take up to an hour for larger hummingbirds to awaken from it.
•  Hummingbirds beat their wings 20 to 80 times a second.