Why is a Song Sparrow Singing at My Bedroom Window at 6 a.m.? 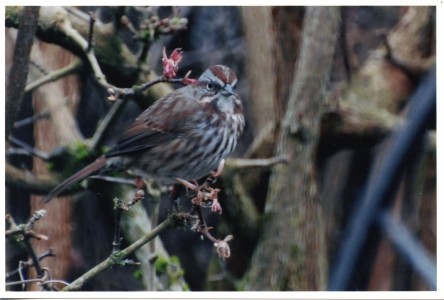 Q: It’s 6:00 in the morning, and a male Song Sparrow has perched on our bedroom window sill and is scratching around and peering in. Loudly he sings a melodious solo, and then flies forward and thumps against the window. Then he does it again, and again, and again! Finally he flies to a high branch in our backyard, and sings another solo! The window strikes must be harmless because he’s done it at least two weeks straight.

A:  This little guy mistakes his reflection for another male song sparrow – a competitor for the attention of a female.  He’s singing to signal his territorial boundaries.  He flies against our window to frighten away the “other male” he sees in the reflection.  American Robins are notorious for this behavior, too.  The good news is that when nesting season is over, the males seem to settle down substantially.

We have been Nancy Tillman fans for years - but she just stole our hearts again! ... See MoreSee Less

Do you love birds and nature but are not interested in working retail? Are you strong and can routinely lift 50lbs? Clean driving record? Works well with others? Maybe you would enjoy working for our sister company ZBird!⠀⠀⠀⠀⠀⠀⠀⠀⠀
ZBird is looking to fill a full time position that includes driving in the Portland/Vancouver metro area, operating a pallet jack and fork lift and pulling and splitting orders in the warehouse. ⠀⠀⠀⠀⠀⠀⠀⠀⠀
Apply on Indeed or on our website! ⠀⠀⠀⠀⠀⠀⠀⠀⠀
#deliverydriverwanted #zbird #nowhiring ... See MoreSee Less

This is so great!

Amazing. That dude thinks a lot about the inner lives of squirrels.