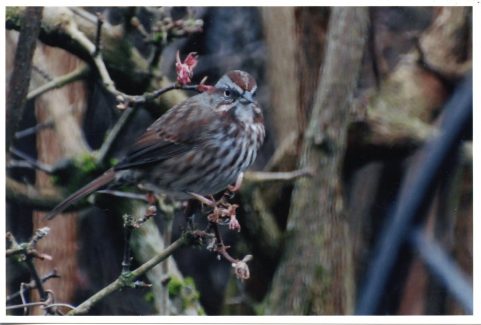 This is the third season “our” Song Sparrow has served as a first-class alarm clock, and a very entertaining one at that.

It’s 6:00 in the morning, and today is no different from other recent mornings.  A male Song Sparrow has perched on our bedroom window sill and is scratching around and peering in.  Loudly he sings a melodious solo, and then flies forward and thumps against the window.  Then he does it again, and again, and again!  Finally he flies to a high branch in our backyard, and sings another solo!

The window strikes must be harmless because he’s done it at least two weeks straight.  This little guy mistakes his reflection for another male song sparrow – a competitor for the attention of a female.  He’s singing to signal his territorial boundaries.  He flies against our window to frighten away the “other male” he sees in the reflection.  American Robins are notorious for this behavior, too.  The good news is that when nesting season is over, the males seem to settle down substantially.

As for “our” Song Sparrow, this is his third season of being a first-class alarm clock, and a very entertaining one at that.  If it’s a typical spring, he’ll sing to us until he is satisfied that his nest is built, his mate protected, and his young are well on their way toward fledging.

The Wild Arts Festival is back! On December 10th&11th the PSU Viking Pavilion will be filled with booths selling nature-inspired art and literature for your holiday shopping needs! We're so proud to sponsor this awesome event full of talented artists, authors, and craftsmen.
Grab your tickets at www.WildArtsFestival.org and we'll see you there! ... See MoreSee Less

Official site: to.pbs.org/3Vpt2da | #NaturePBSGet an intimate look at what makes woodpeckers so special. Explore their unique abilities and intimate ...
View on Facebook
·Share

Was a really great show!

Caught a bit of this on tv and wanted to watch the rest but didn’t know how to find it!! Thanks for posting!!

🍂🐦Fall Migrant of the Week: Rough-Legged Hawk🐦🍂
In late fall, keep your eyes peeled for the Rough-Legged Hawk as it arrives from its breeding grounds in the far Northern tundra. There, the breeding season is closely tied to the native population of lemmings, with the rodents as their main food source. Their name references the fact that their legs are feathered to help protect them from the below-freezing temperatures of the tundra. Spot them diving from their perch this winter onto prey in fields and clearings.
📸 Hayley Crews ... See MoreSee Less